Mojito is a model-view-controller (MVC) application framework built on YUI 3 that enables agile development of Web applications. Mojito allows developers to use a combination of configuration and an MVC architecture to create applications. Because client and server components are both written in JavaScript, Mojito can run on the client (browser) or the server (Node.js).

Mojito offers the following features, some of which are discussed in the next section:

You also want people from all over to be able to use your slideboard application, so you will need to support internationalization and localization. Users should be able to see the application in their local language or choose their preferred language.

In the following, we will discuss how Mojito makes it easier to create the slideboard application.

Your slideboard application will need to fetch articles either through some API or an RSS feed. Most conventional Web applications that need data have both server-side and client-side components. The server-side script, written in a language such as Python, Perl, Ruby, PHP, or Java, fetches data and then passes the data to client-side script written in JavaScript. The one Web application would have at least two languages and would need to make at least two network calls: one to the data source, and one between the server-side and client-side code to transmit data.

Because Mojito is written entirely in JavaScript, your application code can run on the server or be deployed to the client. From the client, you can use the YUI YQL Utility, to get all types of Web data, removing the need for the client to fetch data from your server.

Your slideboard application is a Web application, but we want users to view it on tablets and smart phones as well. Do you create separate versions of your application? Do you write code logic that serves the correct version?

Mojito can identify the calling device by examining the HTTP header User-Agent. You create custom views for different devices, and Mojito will render and serve the correct device-specific views.

You want your users to be able to take advantage of the rich features of the device they are using. Users skimming through articles on an iPad should be able to use the touch screen, and Web users should have features such as mouseovers and right-clicks. Handling these UI events requires JavaScript, so how do you handle them when the client has disabled JavaScript?

Mojito allows you to serve code to the client, so that your users can use the rich interactive features of their devices, but Mojito also allows you to handle cases when the client has not enabled JavaScript. You can write HTML and CSS so your page functions without JavaScript sure that your application works with just HTML and CSS. Because Mojito runs on Node.js the code intended to be deployed to the client can instead run on the server.

The following sections looks at how Mojito is different from past Web development paradigms. Much thanks goes to Nicholas C. Zakas who wrote the blog post Node.js and the new web front-end from which much of the following content is based on.

This diagram reflects the separation of client and server code as well as the back-end UI layer in typical Web application architectures. 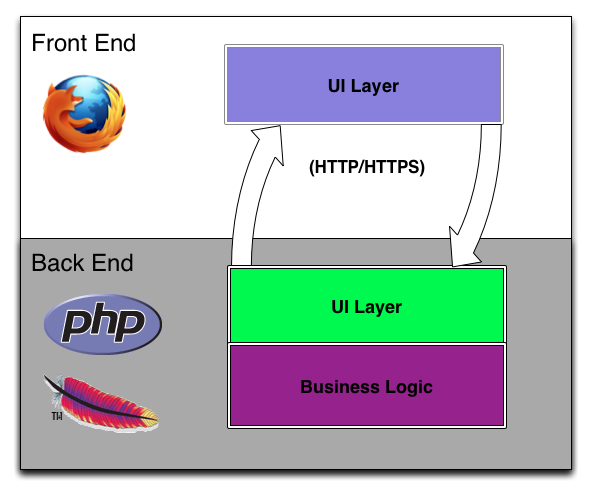 In contrast, because Mojito runs on Node.js, the back-end UI layer now lies in the realm of the Mojito application developers, allowing you to control the payload: 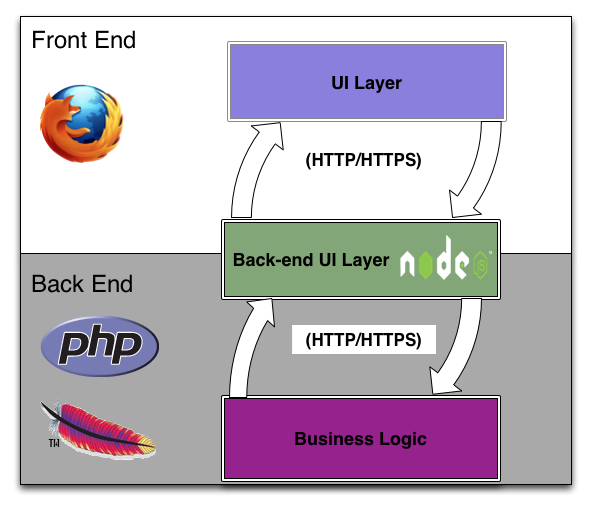 Building on an Existing HTTP-Based Service¶

Frameworks such as Rails and Django allow you to connect directly to a database through object-relational mapping (ORM) with no intermediate service layer. With Mojito, you do not directly connect to databases, but instead make HTTP requests to an existing service, thereby, the separating the application code completely from database queries.

This is an important point to remember for those developers who are coming from Rails, Django, and other frameworks that allow you to directly interact with a database. In general, your Mojito applications will need to make HTTP requests to a service that handles database queries or to Web services. You can make HTTP requests with the Y.mojito.lib.REST Class.