You will be creating a dashboard application that reports GitHub activity and displays blog posts and displays tweets about Mojito and YUI. We will be building our application in stages, so that you will start from the most basic Mojito application and then add new features.

The screenshot below is of the final dashboard application that you will be building. The application has a separate dashboard for YUI and Mojito information, such as GitHub statistics, Twitter feeds, YouTube videos, etc. 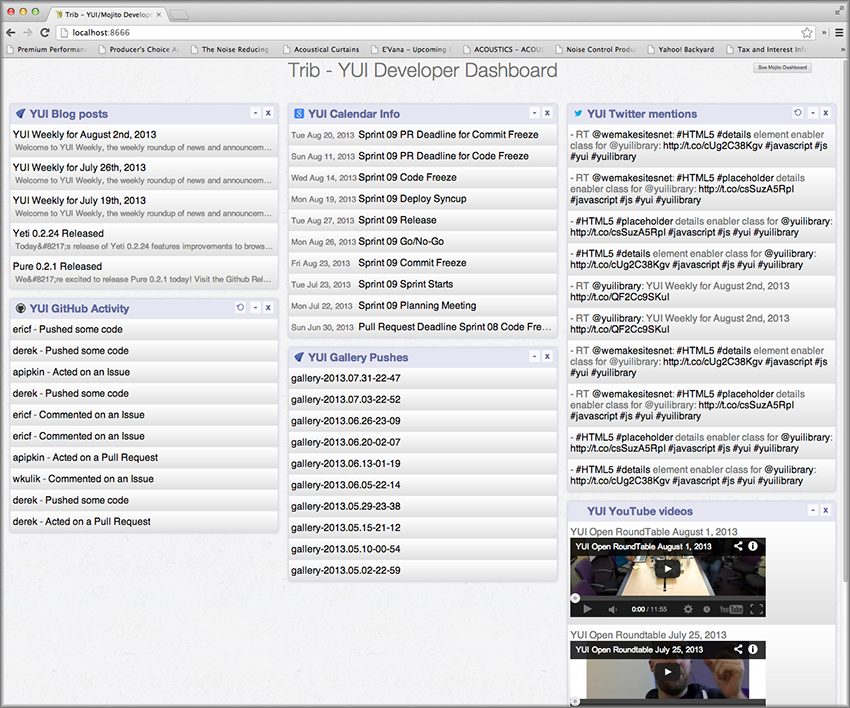 Who Should Use This Tutorial?¶

Intermediate to advanced developers interested in creating Web applications for the desktop and mobile devices will benefit from using Mojito. Those developers who have used the YUI library and Node.js will have an easier time learning how to use Mojito.

Before you start the tutorial, we recommend that you be familiar with the following technology:

And, you should also understand some of the basic concepts and terminology of Mojito:

What We Want You to Learn¶

During each module, we want to emphasize a specific topic and create an application, so that you will learn something that you can build on and have yet another application under your belt. More importantly though, we want to show you how to develop Web applications with Mojito, and when you’re finished, feel confident enough to use Mojito to add features to your own Web application.

You’ll be creating a standalone application for each module, which will be displayed in a screenshot in the introduction. The application that you create in a modules will be used as the starting point for the proceeding module. The idea is to build a complex and full-featured application in stages, so that you not only learn the focus of the module that you are working on, but also are learning how to develop with Mojito. Starting from where we left off will allow you to save time and your prior efforts, but there will be times when we need to move or modify code from the past module. This is intentional and part of the education for learning how to use Mojito.

How the Tutorial is Structured¶

The structure of modules, in general, will include the follow sections:

Besides Mojito, your dashboard application also relies on the following technologies:

The Dashboard application is a Web-based application that utilizes Mojito to access YQL data sources for various information about the YUI and Mojito projects. Mojito is the application layer that handles accessing the YQL data and generates the HTML which is sent to the client. Presentation is handled via HTML using the Handlebars template engine in Mojito. Look and feel is handled by YUI CSS including responsive grids. We’ll also have separate templates for the iPhone and iPad to customize the the layout of the page.

We expect that you have read the Introducing Mojito and completed the Mojito Quickstart. The introduction will give you an overview of Mojito, and the quickstart will show you what you need to install and how to run simple Mojito commands to create and run a simple application.

Because Mojito runs in the Node.js environment on the server, we recommend that if you do not have experience using Node.js or npm, go through the Node.js documentation and How to Node. Understanding the Node.js module system, why not to write blocking code, being familiar with the API and utilities, will all help you develop and debug Mojito applications. You’ll also learn how to use npm modules and Node.js core modules to do work for your applications.

Mojito runs in the Node.js environment, but it’s built with YUI. Understanding YUI will help you understand the Mojito source code and write applications. You can also easily use or write YUI modules that can be used in your application code. You don’t need to know YUI to use Mojito, but just being familiar with YUI will give you a great advantage in developing Mojito applications.

The tutorial is divided into the following ten self-contained modules, each covering a critical topic for development.

Where to Find Source Code?¶

For each module of this tutorial, you can find the source code in the examples/dashboard directory of the Mojito GitHub repository. If you find issues or would like to improve the applications, feel free to make a pull request.

Conventions Used in This Tutorial¶

To help you remember what you learned in each module, we’re going to use the following naming convention:

Commands, variables, directories, and files appear in monospaced font. Commands that you are supposed to type and GUI elements appear in boldface type. Ellipses in code snippets indicate that the displayed code is only part of the whole: