A big thanks to all the campuses for a fantastic fall 2009 University Hack Day season!

On September 12th and 13th, each of the five Hack U winning teams from the 2007-2008 season flew out to Yahoo HQ in Sunnyvale, CA and battled it out for the championship, plus bragging rights for their school.

Here are some quick links to pages listing out all the great hacks from the various schools visited for HackU 2008:

The winners were DialPrice, Skedu and Trip Hacks. Photos on Flickr

From the University of Illinois at Urbana-Champaign:

Winners: Pages--which we ought to just go ahead and put online in the YUI section--Telescreen, and FlightTracker.

From the University of California at Berkeley:

During the fall of 2006, Hack Days happened on the campuses of five universities across the USA, including the University of California at Berkeley, Stanford University, Carnegie-Mellon University, and the University of Illinois at Urbana-Champaign. We chose five finalists and brought them to Sunnyvale in March to show their hacks to our founders and top engineering talent. And the winner is .... Greg Schechter, from UIUC

Faced with a diverse field of hacks mashing up sources from Maps, Music Engine, Search, Flickr, del.icio.us, and YUI, the judges chose a hack built with Yahoo! Widgets, Greg's Slide Rule Widget. Here's a quick video of Greg's winning presentation, thanks to the new YDN Cam and Matt McAlister's Jumpcut editing skills. The widget itself is tough to see, but you'll get a good feel for its capabilities and the thouroughness of Greg's hack.

Greg later accepted a summer internship with Yahoo!, and became part of the team that won Best Hack at our summertime internal Hack Day. (Sorry, we can't show you the winning hack yet ... when it goes into production, we'll be sure to let you know!)

Got Widgets? Check out Greg's Slide Rule yourself.

About the Public Hack Days

We had over a hundred hackers, 31 hacks submitted, and a ton of photos uploaded to Flickr. Where present, we've included an URL; if it's not working, please let us know on the blog entry.

And now, the winners:

"You can see a list of all the hacks (including which hacks won the judges awards), you can launch URL demos for many of the hacks, and, best of all, you can jump to any hack instantly to watch it (no waiting for it to load or fast forwarding through the video to try and find things). We've also displayed the list of hacks directly on the video time line, which makes scanning around for hacks incredibly simple." 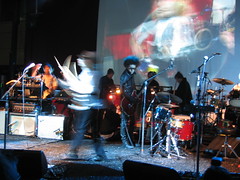 Fun was had, felt was rubbed, Beck played, many hacks were completed. Videos are here:

... but at the very least you MUST check out Mo Kakwan's contribution, Blabber. Mo won the Best Schtick award and made a short film and a start-up around his experience, which is awesome.

... and a whole bunch of links were bookmarked on del.icio.us:

The complete list of winners is on the Hack Day blog, here:

... along with two of our best presentations, Matt Sweeney's "Web 2.0: Getting It Right the Second Time" and Ian Lamb's "The New Hacker's Tookit."