Setting up rewards on an ad unit allows you to directly monetize your ad unit in return for granting a currency to the user. Your users are rewarded the currency of your choice for seeing a video ad. When you set up a reward, you choose your conversion rate.

The reward for seeing a video can be supported by server-side or client-side rewarded integration. For example:

One of the most popular integrations is in the storefront area of an app. In a storefront, users can generally purchase goods, get virtual currency and discover opportunities to earn free currency or goods. Typically, you create a button within your app in the storefront area, like Click here for free points, that launches the video ad.

Yahoo enables the setup of the Client-side rewards system without requiring you to integrate your app with the server-side callbacks.

You can serve client-side rewarded videos into Full Screen ad spaces where users are offered a reward for watching a video. The highlights of this setup are:

You can now save your ad unit.

Look for a green success banner at the top of this page to ensure your ad unit has successfully saved. Should it not save correctly, you will not be able to retrieve ads later on. Clicking “save” again should resolve this issue. 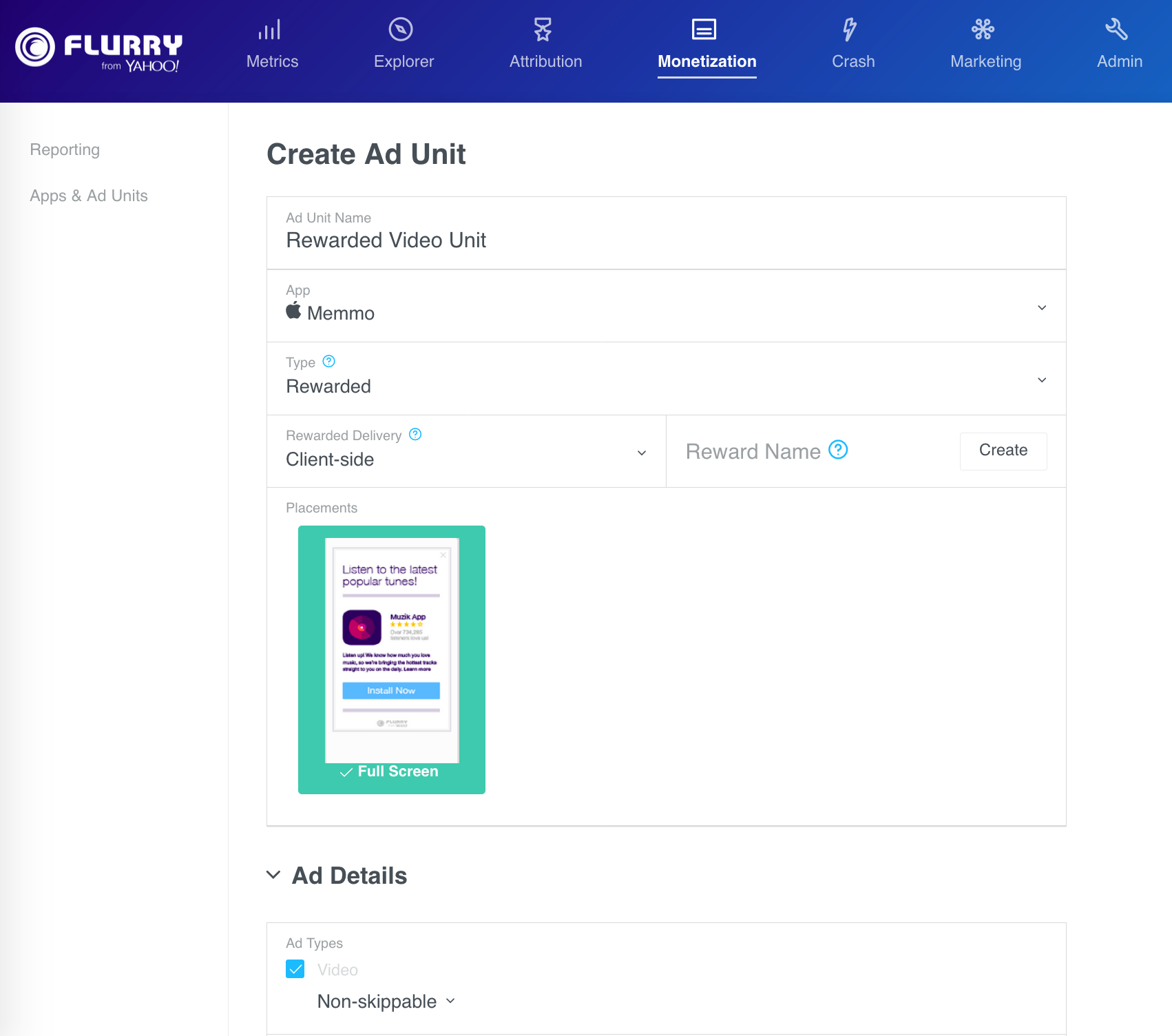 Deliver Client-side Rewards in Your App¶

For ad units that are configured as Client-side rewarded, the Flurry SDK triggers the onVideoCompleted listener callback for Android and the adInterstitialVideoDidFinish delegate callback for iOS, as the user completes seeing the video.

You’ll need to provide the code in these callbacks that rewards the user for seeing the complete video. Details on code integration are provided below.

When this listener method is triggered, it indicates the user has completed watching the video and has earned the reward.

When this method is triggered, it indicates the user has completed the video watching and has earned the reward. The amount of this reward is the same for each user and each video watched.

Yahoo enables the setup of the Server-side rewards system where Yahoo sends the server-side callbacks as the user completes seeing the ad.

You can serve server-side rewarded videos into Full Screen ad spaces where users are offered a reward for watching a video.

You can now save your ad unit.

Look for a green success banner at the top of this page to ensure your ad unit has successfully saved. Should it not save correctly, you will not be able to retrieve ads later on. Clicking “save” again should resolve this issue. 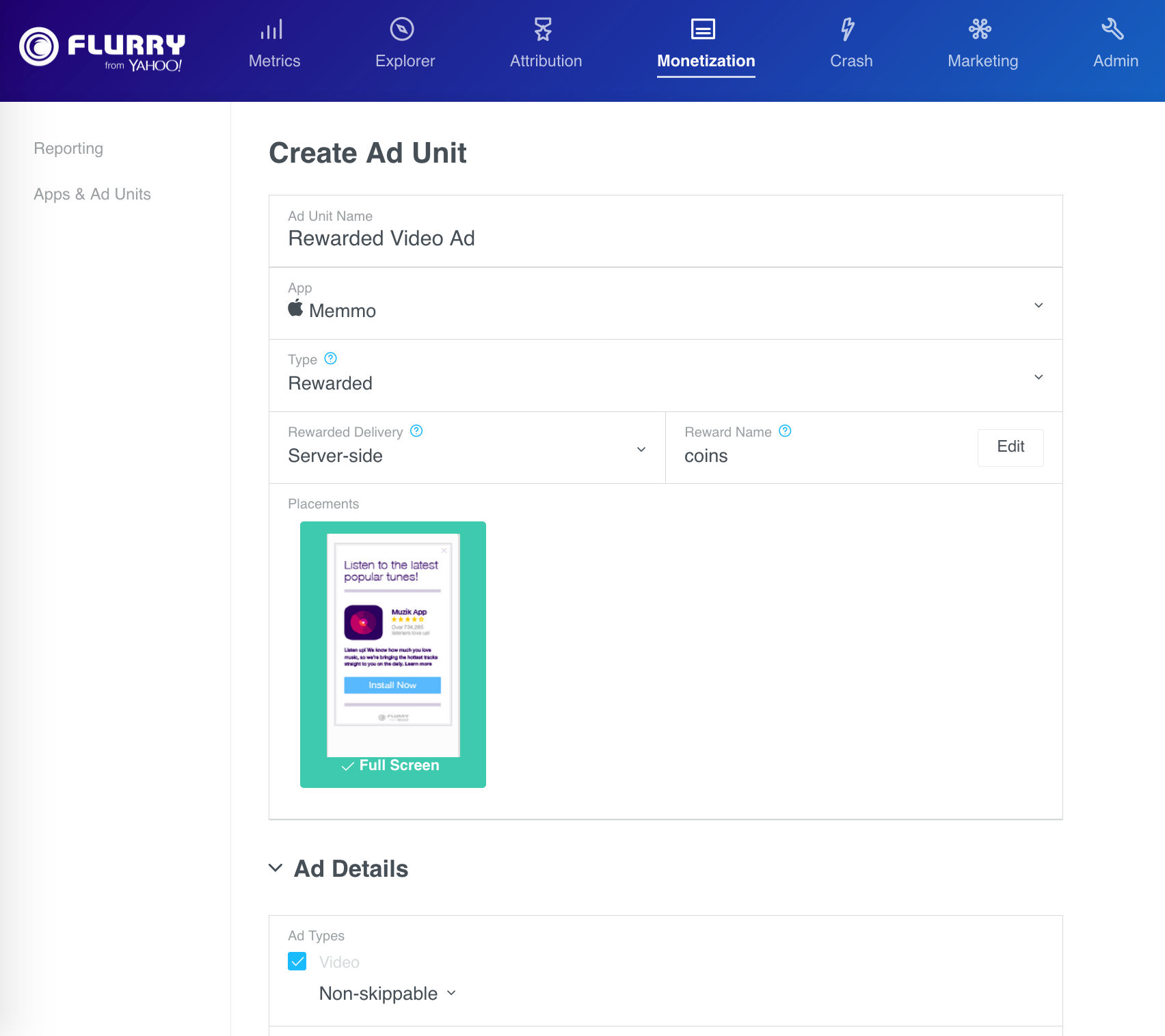 For server-side Rewarded spaces, inventory can be served into interstitial-sized Ad Spaces only.

The callback is called whenever a user is granted a reward (on a conversion).

Your callback server must return a 200 response whenever it is able to process the reward. If your callback server does not respond with a 200, Yahoo will continue to send the same callback at increasing intervals until your server responds with a 200 or a max retry limit is reached. Consider defining a per-user reward limit to protect from abuse. 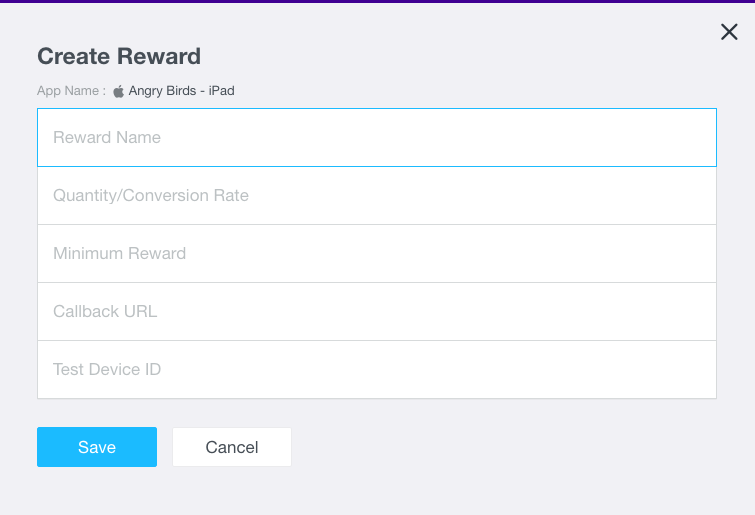 For an iOS app, the callback contains iOS identifiers to help identify the device that originated the callback.

For an Android app, the callback contains Android identifiers to help identify the device that originated the callback.

Yahoo will add the following parameters to the end of the callback URL automatically:

The fhash value is the following:

The URL that the Flurry service will hit in this example would be:

Yahoo recommends that you verify that the fhash value equals:

Doing so ensures that the callback really came from Yahoo because only Yahoo and you know your secret key.

Because Yahoo wants to ensure that your users get their rewards, there is a possibility that you could get the same callback URL twice for the same rewarded action. Therefore, Yahoo also recommends that you store the fguid on your end and ensure that you only give your users one reward for each unique fguid value that you receive from Flurry’s callback service. Consider defining a per-user reward limit to protect from abuse.

You can see your application’s secret key by going to the App Publishing Tab and clicking the Applications & Ad Units link in the left-hand navigation.

There is a different secret key for each of your applications!

Once you get a rewarded callback from Yahoo, you will need to match it back up to whichever user triggered the callback. The best way to accomplish this task is to instantiate the FlurryAdTargeting object and assign it the key/value cookie pair in your app that can be used to identify the user who completed watching the video. These key/value pairs will automatically be added to the callback URL.

In the above example, user\_id=1234 will be appended to your callback URL. You can use this to identify and reward that user’s account. If you rely on FlurryAdTargeting to set user cookies, ensure that it is declared before any type of rewarded ads are displayed.

On Android to match users to their rewards, similarly you call the setUserCookies method on the FlurryAdTargeting object.