You can serve native, video, interstitial and banner ads very quickly and with little effort using Yahoo App Publishing and the Flurry SDK.

The Flurry SDK provides you with an object-based API to create objects for Native, Interstitial and Banner ads. This means that you can use individual objects to control the lifecycle of an ad.

To take advantage of new Flurry App Publishing features, Flurry recommends that you get the new Flurry SDK and integrate your Android app.

In addition, the sample Yodel Android app shows different types of native ad placement, including vertical and horizontal streams of data interspersed with native ads. The source code for that sample is available on Github.

Before you begin native ad integration, you may wish to review the Native Ad Design Guidelines. The guidelines are intended to help you build engaging ad experiences while protecting the integrity of your advertisers’ brand assets. You need to adhere to these guidelines when implementing Yahoo native ads in your apps.

For a quick view of the native ads in an app, you can build and run the Flurry sample Android app that serves the native ads. The sample Yodel app shows a vertical and horizontal stream of Tumblr blogs with native ads blended in. The sample is available on Github.

Step 1. Before you can integrate the code into your application, you will need to configure the ad unit that your code references on the Flurry dev portal (http://y.flurry.com). For native ads, the ad unit is configured as the “Stream” ad placement. For detailed instructions on how to configure Stream ad units, see Creating Native Stream Ad Spaces.

The current version of native ads supports static (image) and video ads. The video ads are mixed in with the static ads.

For all other ad unit placements, follow these detailed instructions on how to configure an ad unit: Basic Ad Space Setup.

Step 2. Integrating code for native displays requires fetching the ad assets and displaying the ad in a custom view that matches the application layout.

Create the ad view to contain the ad assets. Place this view within another view of your app.

Step 3. Initialize the native ad, assign the FlurryAdNativeListener and request the ad from Flurry:

You can create multiple native ad objects at the same time. The SDK keeps track of the fetch requests the app makes and adds the returned assets to their corresponding ad objects as they are made ready. The app can destroy the native objects as it sees fit using the destroy() method of the ad object. Otherwise, they will be destroyed with the context that created them.

Note If your application supports the device rotation, use the application context when creating the native ad objects to prevent the object from being destroyed with the Activity.

In the app code, implement the FlurryAdNativeListener to receive the callbacks related to the ad’s lifecycle events. You will need to implement the following callback methods:

To enable impression and click tracking, call setTrackingView() on the ad view created in the earlier step.

If you plan to re-use the view to show different ads, call removeTrackingView() before setting the new ad tracking view.

Step 6. Parse the received assets and compose the view to display the ad.

For example, the following code snippet demonstrates the process:

The potential assets and their key names are shown in the table below.

The video ads do not have an explicit asset name and the video url is not exposed. Rather, the video ads are identified with the isVideoAd property of the native ad object set to true.

For all the assets whose type is Image, the value for the asset is a url string that links to the image. Note that the url points to either the local or remote resource:

If you wish to use the memory cache, Flurry recommends you load the images directly instead of using the loadAssetIntoView method of FlurryAdNativeAsset object.

The Video ads are cached on the device by the default.

To render a native video ad, you must use FlurryAdNativeAsset#loadAssetIntoView().

Starting with the Android SDK version 6.2.0, Flurry enables newer display format for native ads. You can choose to show the condensed ad view (also called Pencil ad format) with elements like title and summary. On tapping the ad, the ad view can be expanded to an elaborate view. This feature can be implemented by making use of the updated FlurryAdNative API and its updated FlurryAdNativeListener callbacks.

Two new methods are added to help set the tracking view in the collapsed as well as in the expanded display state.

Normally native ads need to set the tracking view to the view that contains the ad’s assets.

Similarly, when the ad is in the collapsed view, it contains the CTA button. Setting the setExpandedViewToTrack on the expanded view, allows the SDK to monitor for the user’s click on the CTA button.

If you start from the condensed view:

Or, if you start from the expanded view:

Note: The Collapse button in the expand view can be used to collapse the view.

The Collapse button can be null. In such a case, collapsing back to the condensed view will be disabled.

Setting the condensed view or expanded view using the APIs will not require you to set tracking view separately.

Flurry SDK provides a delegate callback to notify when the display state is changed by either tapping on the condensed view or tapping the collapse button.

The FlurryAdNativeListener can implement this callback and respond appropriately as follows:

If you build and run the sample app, the native ad integrated into the app looks like this: 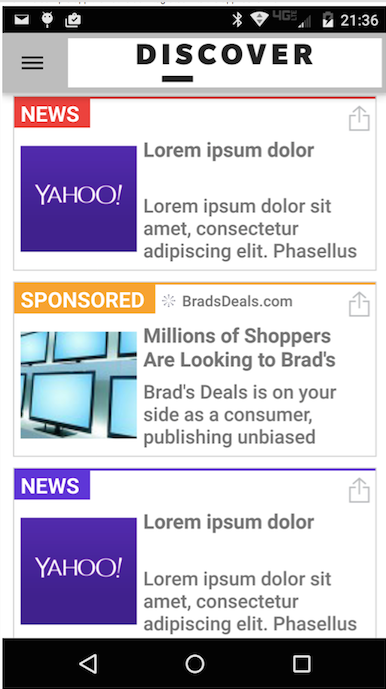 Because every app is different, Flurry encourages you to experiment to find what works best.

Use Flurry Analytics to determine places in your app with the highest user traffic. Typically, good placements include:

The following section shows an example of an interstitial integration. The basic steps involve fetching an ad and displaying the ad when it is prepared and made available. Interstitials ad serving flow is best implemented with the fetchAd and displayAd methods and the FlurryAdListener interface.

Run the app to see an Interstitial ad display.

You should now see an ad similar to the following: 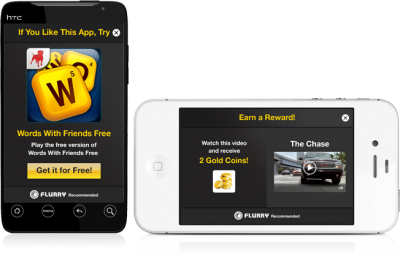 Alternatively, you can fetch banners asynchronously when the Activity is started and display it as soon as the banners are made available by the SDK in the FlurryAdBannerListener’s onFetched(adBanner)` call.

For details on using FlurryAgent.onStartSession(), see Get Started With Android.

These are the parameters when using FlurryAdBanner:

A banner’s position on the screen is, by default, on the top or the bottom of the screen. The suggested RelativeLayout defined in your layout for the activity determines its actual location. You can use it to place the banner in the non-standard top or bottom position.

Once displayed, the banners are refreshed every 30 seconds until the adBanner.destroy is called. The default 30 seconds refresh can be changed on the dev portal. For more information, see the Ad Refresh section in Advanced Settings.

You can use a number of configuration parameters to modify the behavior of your ad units.

Setting an ad unit into test mode is meant to help you validate your integration. Test mode removes any content or geo filtering before delivering ads into the ad unit. Note that only ads from the Flurry network can be placed into test mode. Ads served from RTB networks are not available in test mode.

To configure your ad unit for test mode:

Add a call to identify any user-specific information you want associated with the ad request:

For detailed information on the Java classes and methods available in the SDK, check out the API Reference documentation for Android.