I have followed your integration instructions, but see no ads in my app.¶

the following lines into your code for interstitial (full screen) ads :

Each error callback provides the FlurryAdError and NSError description that you can look into to understand the cause for the failure to receive the ad object.

The error codes that can be returned to your app are as follows:

In case the ad object is received, similarly each delegate fires a callback:

There are few reasons for this error, some are temporary some are reflection on geographical availability of Flurry ads. To resolve:

or the same setting applied for your native ad unit

Please do remember to turn the test mode off prior to submitting your app to the App Store. 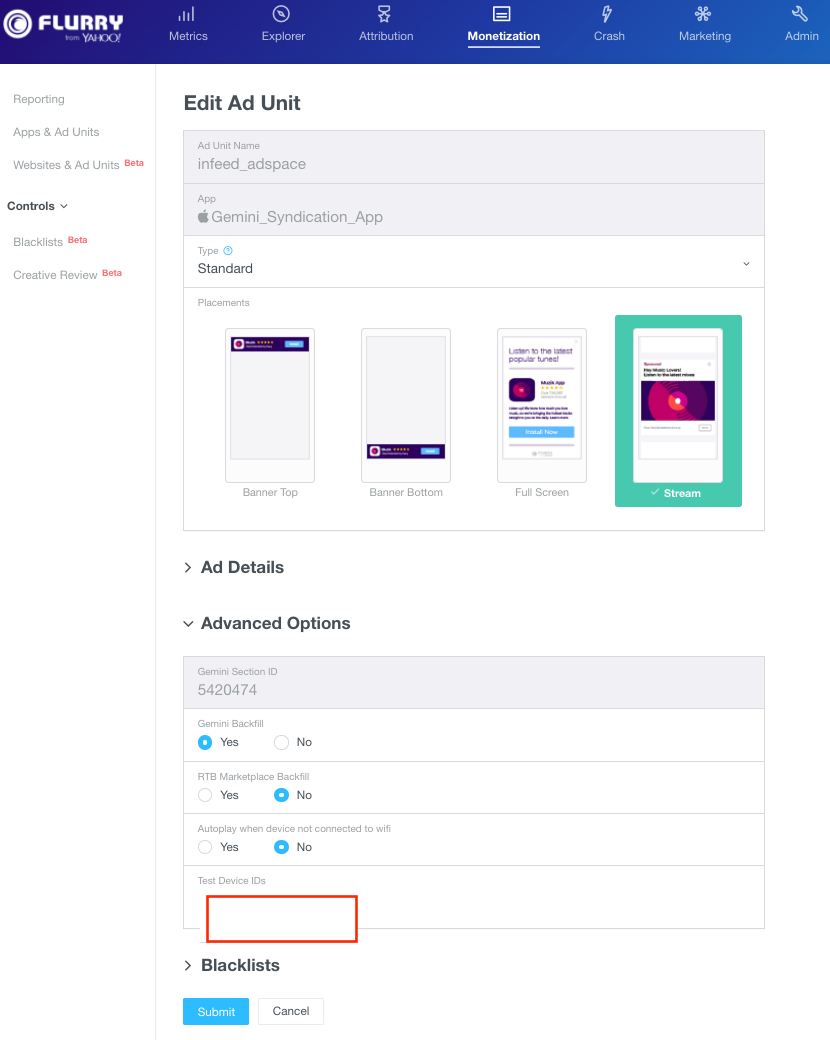 The (void) adInterstitialVideoDidFinish:(FlurryAdInterstitial*)interstitialAd delegate method will be called when a video finishes playing to inform the app that a video associated with an ad has finished playing.

This method is invoked for the Rewarded (Client-side or Server-side) full screen takeover ad units only. The ad unit configured as the Standard ad mix will not invoke this delegate.

The ad unit mix configuration is done on the server side, see further instructions: to integrate rewards into your app .

If you are integrating Flurry ads in a UIViewController of your app then set FlurryAd delegate in viewDidAppear (instead of in viewWillAppear), do not set the delegate to nil in viewDidDisappear (instead of in viewWillDisappear). When the user clicks on the ad, the ad is expanded and the viewDidDisapear is called prior to the ad being opened in an another view. Also do not deallocate the ad object in the viewDidDisappear (or viewWillDisappear).

Apple requires me to verify that the app and any 3rd-party libraries respect the Limit Ad Tracking setting. Does Flurry respect this setting?¶

The Flurry SDK is compliant with Apple’s guidelines related to the Limit Ad Tracking setting.

How do I display the sponsored icon/advertiser name when mediating native ads with MoPub?¶

The Yahoo Gemini branding logo is a custom property in MoPub. To show it in your layout for iOS, you will need to override the layoutCustomAssetsWithProperties:imageLoader: method in your implementation of the MPNativeAdRendering subclass.

To do this, use the following: