Flurry Analytics facilitates conversion funnel analysis, which means to track the conversion of users as they progress through a series of defined steps. This enables you to visualize the completion rate of user progression through any event flow and identify which steps users are not converting through.

Including a Dimension allows you to visually compare conversion rates by different attributes. Adding Filters allows you to narrow the scope of the funnel to analyze a subset of users.

Funnel types are comprised of the following:

Funnel steps can be any custom event instrumented and these pre-defined standard events:

To build and run Funnel queries, first navigate to Explorer as described in Getting Started.

Once you are in the Explorer UI, you can run saved queries by selecting one from the Saved Queries dropdown or create a new query by clicking the + New Query button at the right side of the page.

To build and run a new Funnel query:

A simple funnel query where you specify the funnel type as the number of user conversions for the First Session will report the First App Launch and the Session Start, as shown in the chart below.

Obviously, this funnel isn’t very interesting as it will always show a 100% conversion rate, but it shows you how the basic construction of a funnel works.

For example, if you select First Session by Gender from the Saved Queries pulldown list, as shown below:

and you build and run a user conversion query with Estimated Gender as your Dimension, your report will look similar to the chart shown, returning values for female, male and unknown genders of your users.

To build and execute queries that return data you can slice-and-dice, Explorer lets you work with a lifecycle of Events. Typically, Explorer generates Install and Session Start events, while other events are generated by your app installs.

Once you run queries on different types of events, you can easily analyze the results. Explorer enables you to determine the value represented by those events.

The following Event types are grouped among data elements in the UI:

Using Dimensions, you can define how your data is grouped and summarized. You can also add dimensions to group data.

Note that if there are no data elements in the Dimensions area, the results of the query will be a single number. 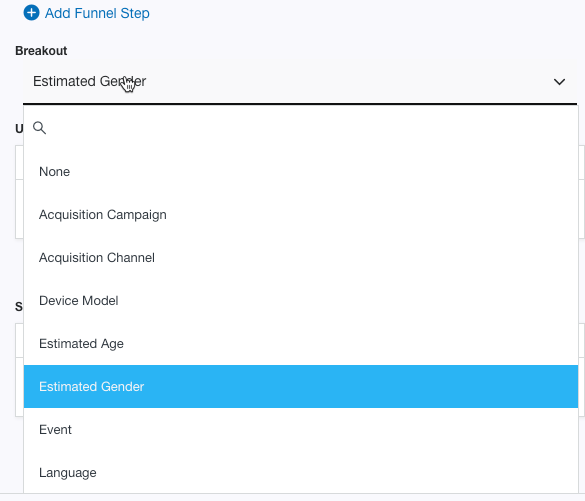 For the Date/Time dimension, you use Install Date/Time.

When you use Filters, the scope of the query can be limited by adding data elements into the Filter box and setting the desired limits. There are two levels of filters in Explorer, User and Session filters.

User Filters User filters are those that control which users are to be include in the funnel. For example, if you only wanted to include users in the funnel that had performed a certain event at least 3 times in the past, you would add an Event History filter under User Filters such as: 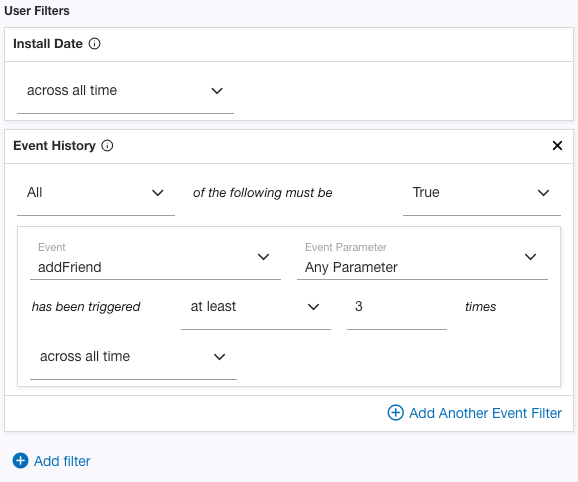 There are many other filters that can be applied at the User level.

While User filters act on Users, Session filters focus on limiting the sessions that are included in the analysis. For example, if you wanted to only include sessions from version 1.1.1 of your app, you would add the following Session Filter: