How textPlus Improved Engagement in One Month with Flurry

textPlus develops mobile apps that offer a completely free telco service. Users can sign up for a free phone number and receive unlimited texting capabilities to any number in the US and Canada. Their newest app Nextplus is one of the most popular communication apps and serves as a full replacement for users’ existing cellular service.

Nextplus’ core use-cases are specific to the free phone number users obtain post-sign-up. In addition, there’s an ad-supported SMS service to the United States & Canada, as well as an international ad-supported voice service. To find out what drives long-term retention in their app, textPlus ran analyses about their specific user behavior. Using Flurry Analytics, their investigation confirmed that their two largest “churn moments” occur when users either fail to acquire a phone number or don’t send any SMS.

Looking at their two biggest markets, the U.S. and Canada, Nextplus saw significant differences between the conversion rates on Android and iOS for users registering and then sending their first message. Android averaged a 70% conversion in the United States and 78% in Canada, whereas iOS averaged 54% and 70%, respectively. 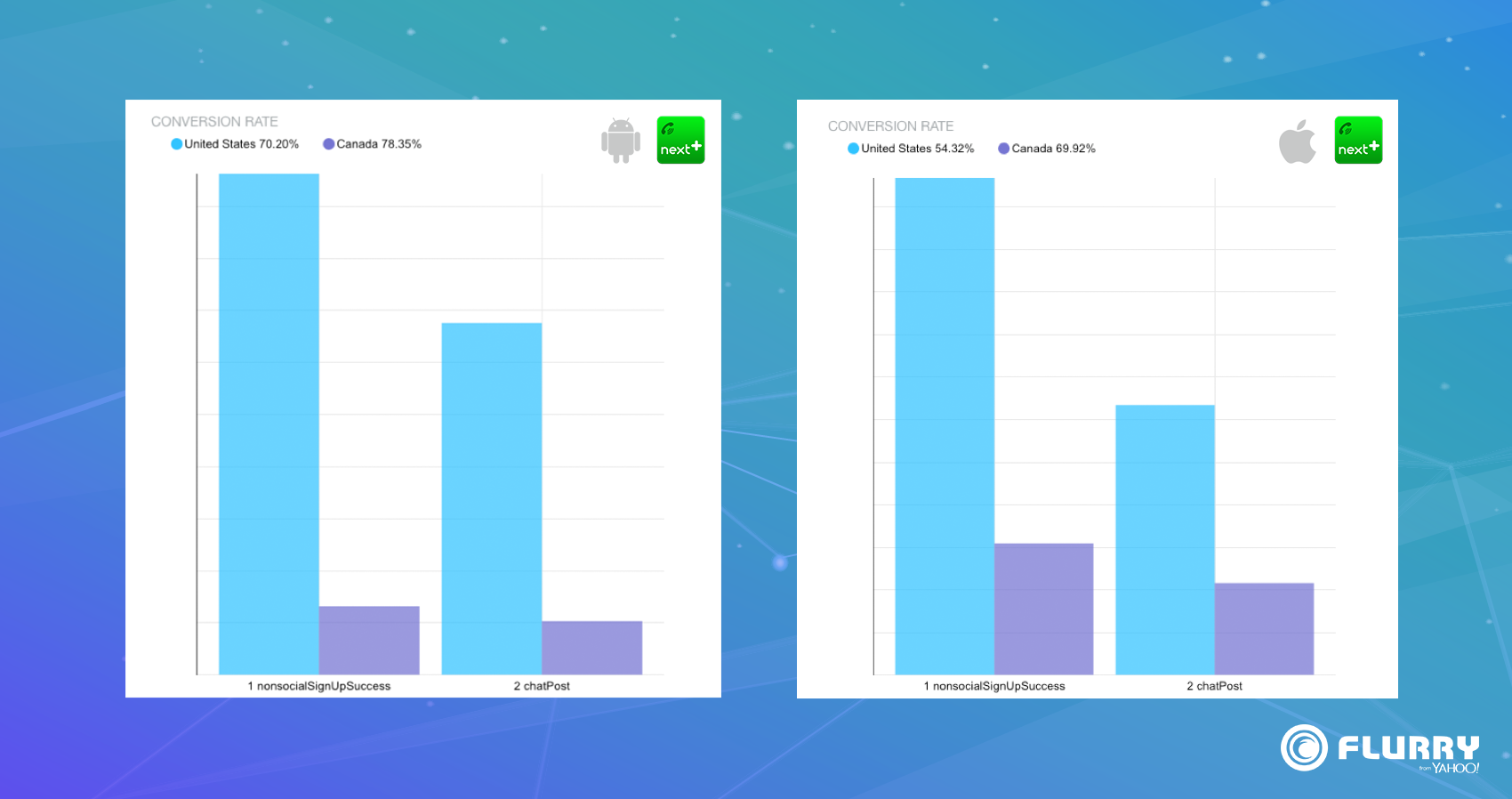 textPlus made it their goal to improve iOS conversion and drive towards the numbers they saw for Android. However, iOS and Android clients already had nearly identical experiences through registration and message composition. This in mind, developers at textPlus had to dig-in and figure out what, if anything, was holding back iOS. 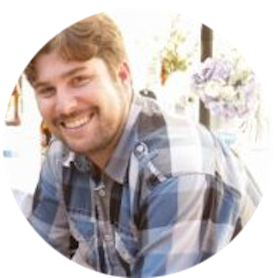 We chose Flurry to guide this analysis and investigation for a number of reasons. We’ve had their SDK in our clients for a very long time and have relied heavily on them for funnel analysis, user pathing, and as an external source to compare against our in-house business intelligence. But what made Flurry particularly helpful in this instance was their ability to quickly & easily filter against specific date ranges while simultaneously drilling down into targeted dimensions. — Samuel Braff - VP of Product Development | textPlus

Search for a Solution, Initiatives and Results

To identify the cause of the conversion gap, textPlus analyzed all of the interface points between the user and their device, and the device and Nextplus’ platform services. With Flurry’s new Explorer functionality, it’s easy to track every action a user performs in-app. Since the user flow analysis on Flurry showed that there was no major discrepancy, the conversion shortfall seemed to be most likely in the data exchange between Nextplus’ clients and platform services. It’s at this point where the developers took the deepest dive, with the goal of uncovering what major differences existed between Android and iOS API requests.

In the API investigation, Nextplus found a key drop-off point for the second request in the flow which is responsible for telephone number allocation. It turned out that their iOS users had a much higher error rate when attempting to acquire a telephone number – a required step for both sending outbound SMS or initiating an outbound phone call. Afterwards, Nextplus’ developers just needed to figure out why the errors were occurring when the request data between iOS and Android matched.

The issue was related to iOS permission acceptance, specifically the permission associated with push notifications. In an effort to reduce spam and abuse via their application, Nextplus’ platform services had quietly rolled out several sanity checks before successful telephone number acquisition. These checks involved frequency of API requests from the same IP address, devices that had registered for multiple accounts, and the presence of an APNS push token. 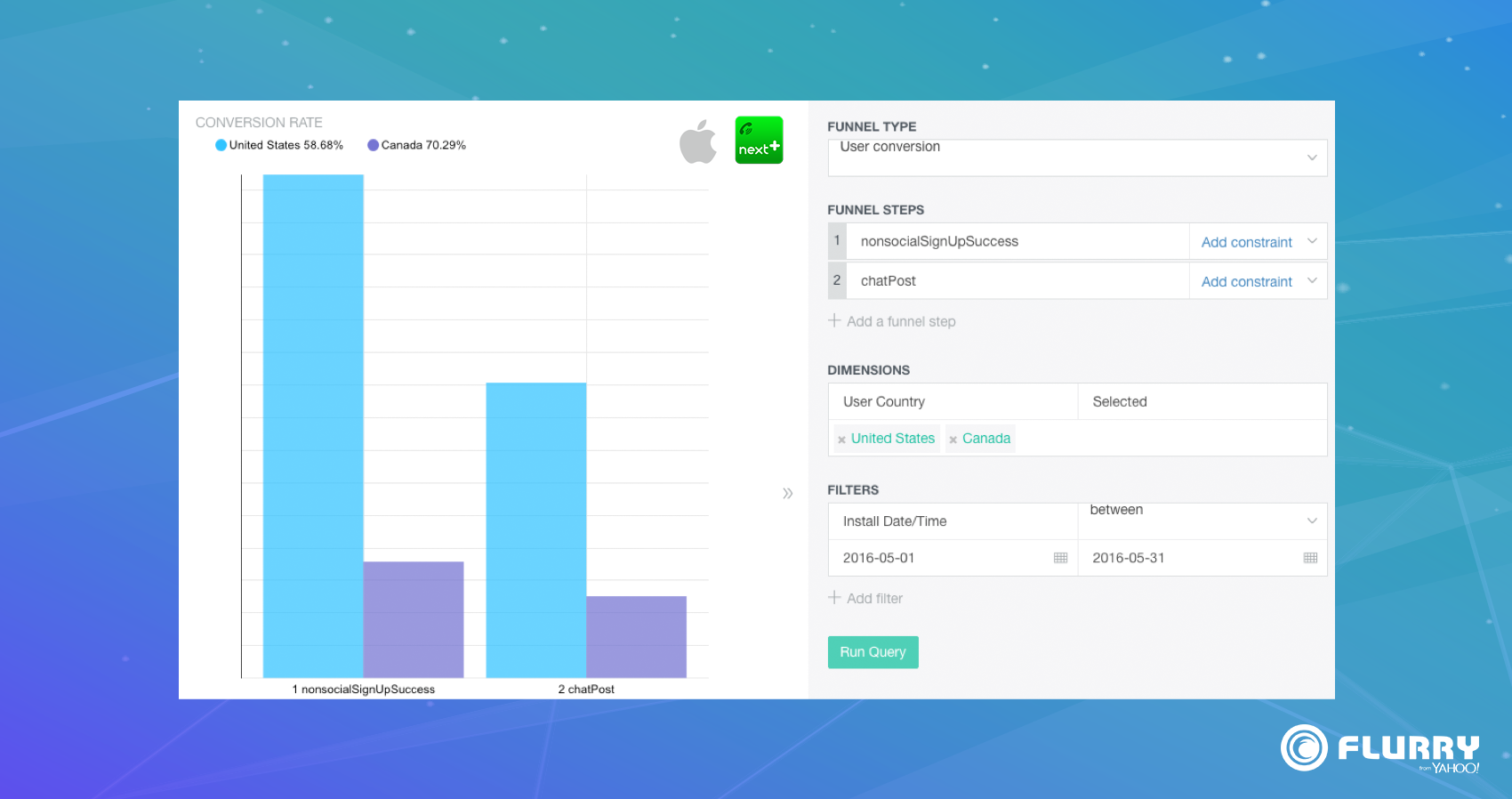 Based on those findings, Nextplus was able to boost their conversion rate in the United States by about 5% in only one month. Since Nextplus identified that an initial chat engagement is a powerful lever for retention, they also saw a serious return rate growth. 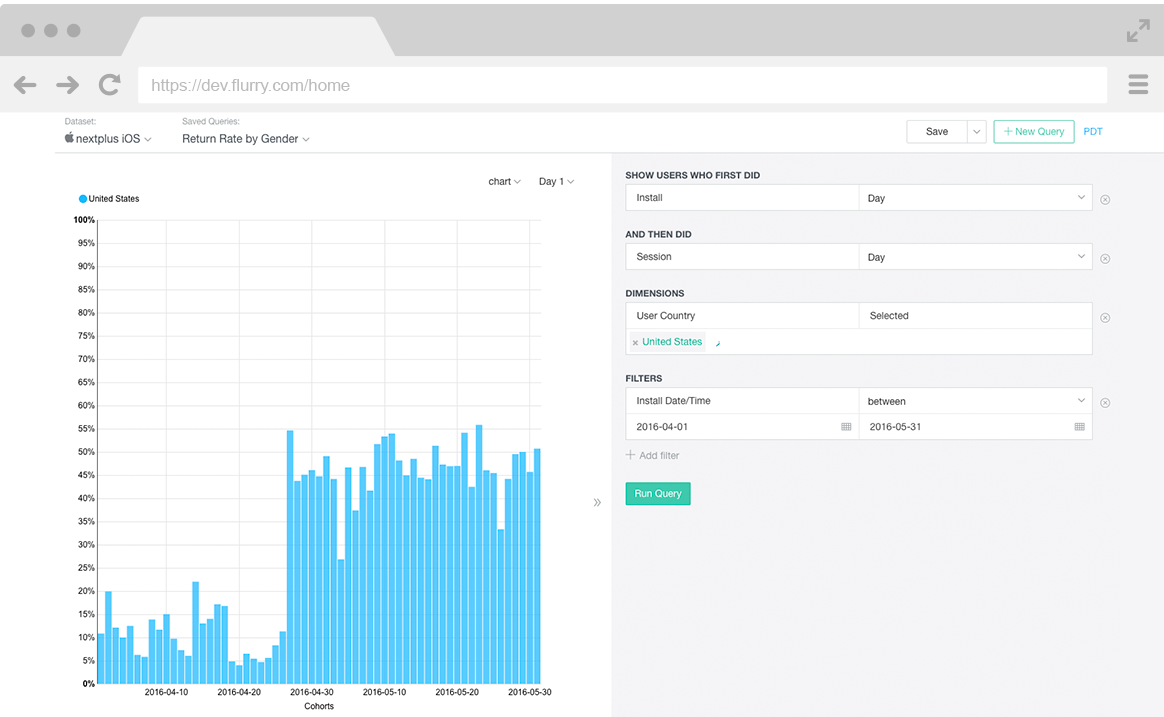 The Day 1 return rate for the US increased from an average of 14.42% in April to 46.33% in May. Nextplus engaged with more users and minimized churn significantly.

Flurry as a Reliable Analytics Partner

Working with Flurry has allowed us to perform regular sanity checks against our in-house data, quickly generate complex visual funnels for new features, and measure retention and session data using highly-reliable filtering to exclude suspicious usage. In particular, Flurry’s new explorer feature has made this even easier by removing the need for pre-computing segmented user groups. We can now do on-the-fly analysis without any computational delays whatsoever. — Samuel Braff - VP of Product Development | textPlus